This review post has been made possible by Review Wire Media and Walt Disney Pictures. All opinions following the gratis advanced screening of Moana in 3D are my own.

Be still my wayfinding heart. Few haven’t marveled at how far they’ll go to explore the horizon. But even if you’ve relish to stay within the comforts of home? You’re still apt to fall in love with the heroic spirit featured in the new Polynesian inspired Disney movie, Moana (Mō-ăh-nă).

This week, I was invited to MJR Marketplace 20 in Sterling Heights, MI for an advance screening of the new Disney CG-animated feature film film, Moana in 3D. True to the spirit of the movie, a small road trip was required. Our voyage was satiated with kid-friendly ultimate pineapple drinks. And popcorn came with tropical fruit punch and gummie bears to sustain our excitement.

Yet nothing makes a movie more anticipated to begin…than the magic of Disney and 3D glasses. 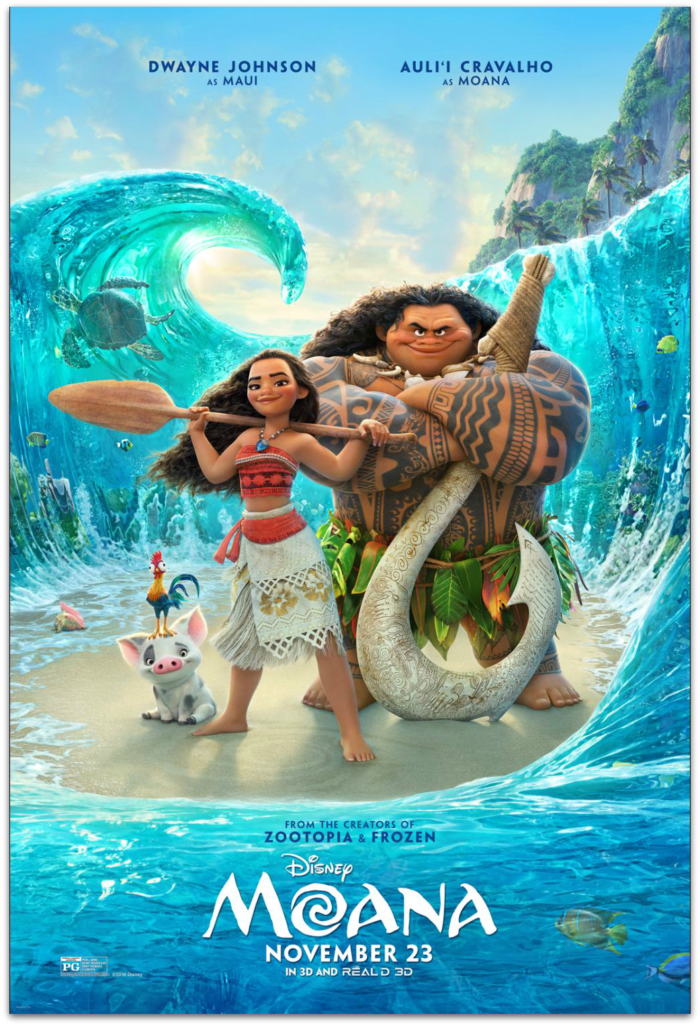 And so the reel did begin, but first to showcase an insightful animated short called “Inner Workings”. As if setting the stage, this cute film was the perfect precurser to the plight that even Moana would wrestle with. All with a great layered animation effect that was easy to view in 3D. Without a single word spoken…this short easily invoked emotions toward the choices we make in our daily lives.

From there, we were quickly launched into the depths of a beautiful Pacific Island paradise. I marveled at everything the 3D imagery amplified; from the sun glistening on the rolling ocean waves, to the strands of Moana’s hair blowing in the wind. Disney did a wonderful job presenting background depth perseption throughout the 3D movie. And nothing was more adorable than the kids reaching out toward the scattering images floating in front of them. Because it’s movies like Moana, that make you marvel at how far animation has come.

But for Moana herself, she had a very long way to go. The chieftain’s daughter, Moana was raised in the comfort of a small village. But her responsibilities to the people she would one day lead, left her questioning her true identity. The ocean was calling her. And Moana yearned for what the horizon held beyond the reef.

Thanks to a quirky grandma (and the Demi-God Maui), Moana would set out on an adventure that would not only help her forge her own path, but also save her people. Action packed, the Moana soundtrack is filled with invigorating scores and melodies the kids will love to sing. Which also do a wonderful job to support the path the film undertakes.

Because as any adult knows, life is filled with navigating strong currents and strange tides. Many of which do not follow a romanticized plotline. So Disney’s Moana did an excellent job featuring the best lesson that little girls need to grow up believing. That they can choose to be the hero of their own story.

[clickToTweet tweet=”Discover the beauty of who you are with Disney’s #Moana in theaters November 23rd! #ad #rwm” quote=”“You may hear a voice inside. And if that voice starts to whisper to follow the farthest star…Moana, that voice inside is who you are.” ~ Gramma Tala, “Moana””]

I felt through more than half of this film that the character of Moana was lost before she ever left the shore. And how frustrating the Demi-God Maui was to not care about aspects further than his own agenda. While some children may see a whole different perspective, my daughter quietly whispered to me during the most pivotal point of Moana’s transformation…”she’s acting just like you did with Daddy”.

So if I utter any warning, it’s don’t ever let someone tell you that Disney feature films aren’t unofficially theraputic. I think that all ages can equally relate to the magic that Disney has created with it’s new Princess Moana. Because we live in a world, where we are led to believe things are inspired for women to support others. While actually, it may be the Universe conspiring to help ourselves all along. If only we would set sail believing in ourselves as much.

And now it’s your turn! Will Disney Moana be your holiday break escape? Or if you’ve already seen it, let me know what you thought and how you related to this great new Disney Princess.

Previous Post: « How To Poach A Turkey This Holiday Season
Next Post: Giving Tuesday and Carter’s Sweet Dreams Pajama Program »